We’ve been back in Dublin for four days, and Andrew is running out of things to do. You run out of things to do, here, if you’re not into writing. Or perhaps it’s just that I see all of the writers, and the writing, and the books, and the gravity of the craft that exists here in Dublin. I am anxious but enjoying it. (That’s pretty telling, the way I describe it, isn’t it – the gravity of the craft?) I feel a lot of pressure, like I always do everywhere, but especially here, to write, and be good at it. That’s all it is. But in Dublin, the people value writers like Australians value Ned Kelly, or Bob Hawke, or Ronan Keating. (Yes, I deliberately said Ronan Keating). We have stayed longer in Dublin because, though we were going back to London for the Literary Festival, we found that the Writers’ Festival was here. The chance to see John Banville (‘Cannot pen an unpolished phrase’ The Independent), Roddy Doyle (‘The Best Novelist of his Generation,’ Nick Hornby), and Anne Enright (‘Her novels are mosaics of small but captivating details,’ The Daily Telegraph… not quite as good a comment?) was too good to be true.

I didn’t get tickets to that event.

But I got tickets to Colum McCann and Jon Ronson.

I am finding that I am getting more writing done, but I feel like I’m getting less. I have pitched to a few magazines, and had a bit of a chat with the features editor from Women’s Health UK, and will hopefully write something for them. I’ve made a few contacts – yesterday, I approached the journalist who was interviewing Colum McCann for the lecture, and asked him about contacts, and he gave me a few. I have written a bit of fiction, but I’m finding that my desire is to write non-fiction. Colum McCan read out, and talked about writing, slabs of prose about real people, in situations completely imagined, but he cannot imagine writing fiction. It’s and odd thing, writing. Jon Ronson talked about a similar thing – the fiction that non-fiction writers create, that’s not fiction, when they use only the ‘gems’ in a person’s life, and discard the rest.

I will write some more about Dublin, but I’m off to see John Banville talk to another writer about Ireland, and I wanted to post. Here, hopefully, are some photos. 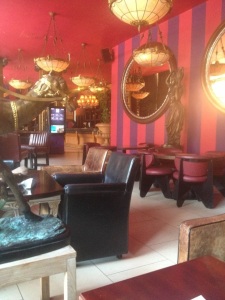 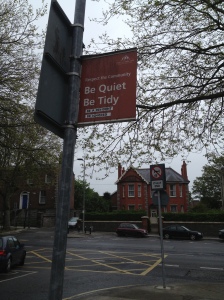 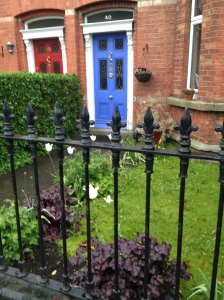 The two men having breakfast with me at the B&B, both from the ‘Stans, but exactly which ‘Stan I’m not sure, are talking to each other in English. As one leaves, I glance up in politeness, and he winks at me. Is that a cultural thing?) They were talking about the Guinness brewery tour, and when it was on, complaining about how cold it was. They were from Eastern Europe. Well… I just found out that one of them was from Portugal but that doesn’t matter because they both had the same mannerisms. As they were looking at the old-school map in a large picture frame above the toaster, trying to find the street the brewery was on, they were pooling the spit at the front of their mouths and sucking it back through their teeth, then blowing air out, looking for the street.